Episode Twelve of The Chippewa Valley Geek Podcast and Rhythm & Blues Revue is complete and can be found here or on iTunes and Stitcher!

We're talking about Asian and Asian-inspired gamery, geekery and all sorts of other cool stuff!

Remember to support the CVG on PATREON!


Hey, how about some show notes?


Please welcome Master Rich Parsons to the podcast this month!

Vampire: Kindred of the East

Empire of the Petal Throne

Well, this geek-who-reads has been reading up a storm in the past year, and I've got a truckload of recommendations for you in Monsters and Modern Fantasy.  Not one, not two, but three books.  And each book is really just a placeholder for a whole series of books that are some of the best current geek-lit out there.  Go read all the books in these three series now.

(Twiddles thumbs.  Makes a play on Words With Friends - SCROTUM for 77 points and another bingo against Brian.  There were higher scoring options, of course.  But when you get a chance to play a funny body part, you play it, no questions asked amiright?) 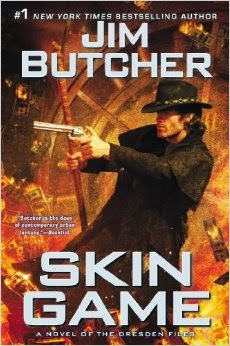 Good job, reader!  Skin Game is book number 15 in The Dresden Files series by LARPer and author Jim Butcher.  And of course, you also read the short story collection Side Jobs for extra credit because it kills you to not have every last scrap of canon.  It can be difficult to discuss a single book from this series because context matters, and things that happened in earlier books have echoes that keep ringing in the later ones.  Harry Dresden is a private investigator and wizard living in Chicago.  Somewhere deep in the back of my brain, I hear Robbie Coltrane's voice whispering "Yer a wizard, Harry," whenever I dive into one of these books, but this series should not be confused with Hogwarts.  Dresden's world is simply our everyday world, with massive power struggles between the Summer and Winter courts of Faerie, werewolves of multiple origins, a white council of wizards, and three different courts of vampires lurking in the shadows of our existence.  The principal characters, both friends and foes of Dresden, are rich and interesting and each have their own arcs of personal development and tragedy.

Skin Game is essentially a heist story.  Dresden has been piled with different obligations and complications throughout the series, and these converge to force him to work with some old enemies to steal the Holy Grail out of the personal vault of Hades, Lord of the Underworld.  Cross-purposes, competing agendas, and inevitable betrayals compete with some really thrilling action in this story, and Dresden manages to survive if not come out completely on top in the end.  The private conversation between Dresden and Hades himself is definitely the OMG moment in the book.  As a rule, the books in the Dresden Files series get better and better as you go along.  However, they are not strictly episodic.  This series reads best in published order, and watching the short-lived TV show won't be any sort of useful preparation to reading Skin Game.  Start with Storm Front and enjoy about 100 hours of great reading to prepare yourself for this book. 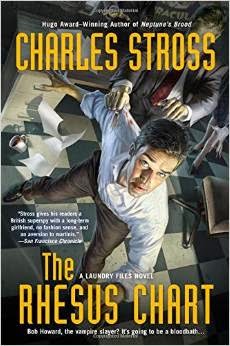 The Rhesus Chart is the fifth book in the outstanding Laundry Files series by Charles Stross.  The Laundry, in case you didn't know, is the super-secret part of British intelligence that deals with supernatural threats from beyond space and time.  We're talking principally Lovecraft mythos here, rather than the more World of Darkness vibe of Dresden.  Along with Things Man Was Not Meant To Know, you can mix in a little bit of James Bond for secret agent spy action and The Office for humor and you've got the feel of The Laundry about right.  In The Atrocity Archives, you learn how Bob Howard  came to join The Laundry and why he can never leave.  Bob, you see, has made the transition from IT professional to  computational demonologist.  Magic is mostly about complex computer algorithms solving multi-dimensional differential equations, and Bob is one of the professionals at The Laundry who has mastered this craft.

In The Rhesus Chart, it seems that a group of quantitative traders working for a major London investment bank have stumbled across a formula of their own while designing a complex trading algorithm.  They all develop a keen awareness of their surroundings, highly enhanced strength and reflexes, an aversion to sunlight, and a thirst for human blood.  Even though everyone in The Laundry knows that vampires don't exist, Bob ends up inevitably on their trail and uncovers an ages-old conspiracy between man and monsters.  Charles Stross has come up with a fresh modern take on the Mythos that avoids becoming another Delta Green. 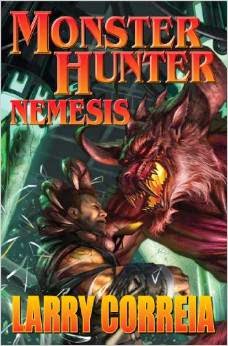 The Monster Hunter International series is so damn good that I recommend people don't start reading them until early on a Saturday morning during a weekend with nothing else to do.  Get comfortable, turn off the phone, have some food nearby, and wear a catheter because you will not be able to stop reading these once you start.  Larry Correia has a real gift for pulling you into the story and keeping you pinned in the literary version of a bridging double chickenwing hold until you finish the book.  You can get the first three books in the series under a collected volume called The Monster Hunters, and the author gains bonus cool points for insisting that the digital versions of his books are published without DRM.

Monster Hunter International is a private organization that collects US government bounties on supernatural creatures.  The first two books in the series, Monster Hunter International and Monster Hunter Vendetta, describe how Owen Zastava Pitt came to join MHI and face down threats of truly cosmic proportion.  Monster Hunter Alpha follows the story of Earl Harbinger, the leader of MHI and an incredibly bad-ass werewolf.  And Nemesis shifts the focus to another character in the Correia universe - Agent Franks.  Franks works for the government Monster Control Bureau and is a monster himself - Frankenstein's monster, specifically.  Long ago, he swore an oath to our founding fathers to defend America from monsters of all sorts under one condition - that the US never tries to create another one of him.  Well, Special Task Force Unicorn (aka STFU) has gone and done exactly that and Agent Franks has gone rogue.  Often at odds with MHI, Franks has to team up with them to defeat thirteen demon-infested replicas of himself in order to stop all of hell from being turned loose upon the world again.


It's worth noting that all three of these fictional modern fantasy worlds have a lot in common.  First of all, they all share the basic Harry Potter premise: Monsters and magic are real, and the vast bulk of humanity lives in willful ignorance of their existence because things simply work better that way.  Second, they are all highly game-able settings.  So much so, that each of these worlds already has its own role-playing game.  You can play The Dresden Files Roleplaying Game, which is based on FATE mechanics.  The Laundry is a stand alone game modeled on the Call of Cthulhu RPG, and Monster Hunter International is a setting for Hero System 6 for those of you that like a lot of tactical crunch.  Finally, they are all really well crafted stories with a rich cast of interesting characters and lots of action.  They are all easy to pick up, and impossible to put down.  To me, these three series represent the vanguard of the new modern fantasy movement.  Start reading.

Check out The Dresden Files Roleplaying Game,  The Laundry and Monster Hunter International  on DriveThruRPG!
Posted by madgael at 5:36 PM No comments: