By popular demand (at least around here), the Baron Von Productions family of podcasts is proud to announce the first spinoff from the Chippewa Valley Geek Podcast and Rhythm & Blues Revue -- The Fairy Princess Podcast, the first two episodes of which can currently be found here, or on iTunes.

There is no gaming content, but there is significant discussion of both ponies and Wonder Woman. 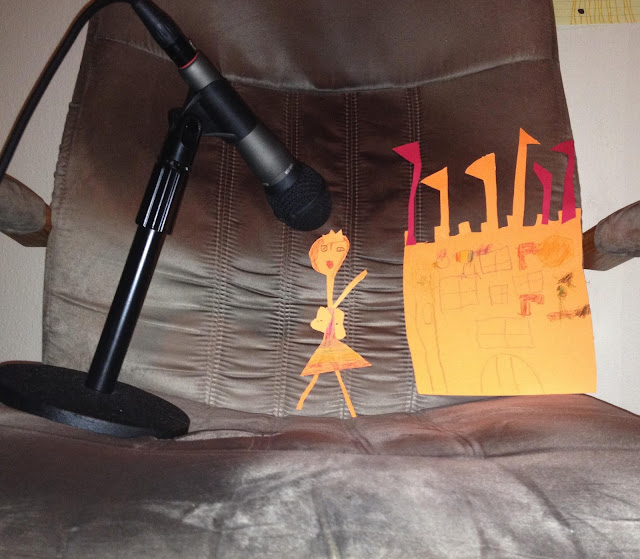 Posted by madgael at 8:06 PM No comments:

What's Geekin' Me Now - The Gamers: Hands of Fate

So yeah.  I'll be the first to admit that I was way, way out of the loop on this one.  The degree to which I have spent the last few years far from the pulse of geekdom and stuck in places only Brodie Bruce could surmise is at times astonishing even to me.

Back when the first Gamers movie, "The Gamers", came out in 2003, sure, I was there.  I watched some clips at the booth at GenCon and laughed my ass off.  The thing with the character just standing there whose player didn't show up that week?  Classic.  Of course, one didn't ask or expect much in terms of film quality or whatnot...  We hadn't been spoiled by years of web series on a level beyond anything that could have been anticipated then.  In many senses, it was kind of like The Blair Witch Project of gaming-dom and it did it well.  It was cool to see our particular brand of subculture up there on the screen and not just as the punchline for a sitcom "nerd" joke.

Naturally I thought "it must be mine", brought the DVD home, and watched it again.  Still funny, but it moved a lot slower this time, and the sound was a lot harder to make out on my TV.  Of course, con swag must be shown off to friends, so we gathered our group to watch it en masse and there were chortles all around.  But on the third viewing it got progressively harder to sit still through the whole thing, and once it ended, the DVD went into a beloved place of honor on my shelf... where it hasn't been touched since, except perhaps by movers.


In the years that followed, "The Gamers: Dorkness Rising" came out, and sad to say, I never got around to seeing it. I always kind of figured I would at some point but it wasn't really a priority.  Naturally that means it never happened.
Even later, I was almost wholly oblivious when the third movie successfully completed a Kickstarter for funding and began shooting.  At GenCon no less.  While I was there.  And I had no idea.  (Cue Brodie please.)  Admittedly I had my hands full with "important" things at the time but I recognize that's no excuse in the food court of my peers. Whenever I did hear the term "hands of fate ", I assumed they were trying some MST3K tie-in to Manos and paid it no mind.  Fool that I was...

This last spring, I went to Berserkon, and in my CVG coverage, I had the good fortune to stumble blindly into an interview with Trin Miller, who was there in relation to her work on the new movie.  During the course of our talk, she invited me to check out a test screening of footage from the film they were having there at the con. (I think I can legally say this now right?  If not, forward all SAG litigation to brian@chippewavalleygeek.com).  So of course, I went.  When you're at a stage of life where you're wondering if it's worth bothering getting out of bed in the morning and someone talented and smart asks you to check out some work that they're actually very proud of, you go and you look, dammit.

Now at this point, I suppose I shouldn't bemoan my state of having known next to nothing about the film before I went, considering I just spent several minutes in my last Up Front this month singing the praises of knowing nothing about a movie before you see it. In this case, there is no question I was blown away by what I saw.  The writing, the acting, the direction, the equipment were all light-years ahead of what I had known from that little DVD from several years before. Even in its unfinished state it far exceeded anything I had actually expected.  Fool that I was.  (Did I mention that already?)  Even the work-in-progress-ness helped add charm to the screening, as the filmmakers would from time to time shout out sound effects from the script for scenes that hadn't yet been completed in post...  Or descriptions of what was happening on the green screen that hadn't been added in yet.After the showing was done - I hope it's not too over the top to say, but I honestly felt more proud on the whole to be a gamer and have some tangential life-connection to this thing I just watched.  I became fully convinced that "gaming cinema" had come full circle to a level where I could easily see this playing any indie film house in the country and being a success. (Of course there are probably good reasons why I never successfully got my film industry career off the ground, so who am I to say?  I mean, I'm still waiting for that Buckaroo Banzai sequel, yo.  (It's gonna happen!  Someday!  The end credits said so...). But nonetheless, I digress.)  In any event the planned GenCon release of the final cut went into my long-term calendar as a must-get-to, to pick up the DVD at a minimum.  And finally see what was really going on in the narrated green-screen footage.  And I also had half a hankering to try my hand at CCGs too, but my wallet responded with dismay and threats to leave me forever if I ever did try getting into MTG, which I understand would likely have had much the same effect anyway.
Now of course the sadness is, as referenced in this month's pod, I unfortunately won't be making this GenCon -- only the second year I have missed out of the last sixteen.  However, our friends at Dead Gentlemen and Zombie Orpheus must have heard my loud cries of silent inner anguish. (I know that makes no sense...  Just roll with it.) For lo, they hath created a webcast of the premiere screening at the con, so we poor homebound souls can watch alongside the viewing audience.  See below:

Can't make it to Gen Con Indy this year?Bummed that you can't see the gorgeous finished version of The Gamers: Hands of Fate after checking out the rough cut at Berserkon?
Well then - "Good news, everyone!"; you're in luck!
www.watchthegamers.com will be streaming the premier of Gamers 3 along with the Gen Con showing. It's password locked now, but when showtime starts that lock will go away and all you have to do is grab some popcorn! Next best thing to being there in person.

If like me, you're stuck home this weekend… Do yourself a favor and tune into this little gem. I will definitely be there watching alongside you and can guarantee you'll be highly entertained.  Even better, once the big con goes down, I recommend you join me in ordering the DVD as soon as it's officially available.  I honestly haven't yet been able to figure out the right link for that yet, but will update as soon as I find something official.
Gamers represent!  By the way, here's the trailer:


PS:  Longtime friend of the CVG Erik Schweitzer is in the movie for about 3 seconds (± 2 seconds), obliviously rummaging through a box in the Dealer Hall.  No sh#t.
Posted by madgael at 10:30 PM 3 comments: 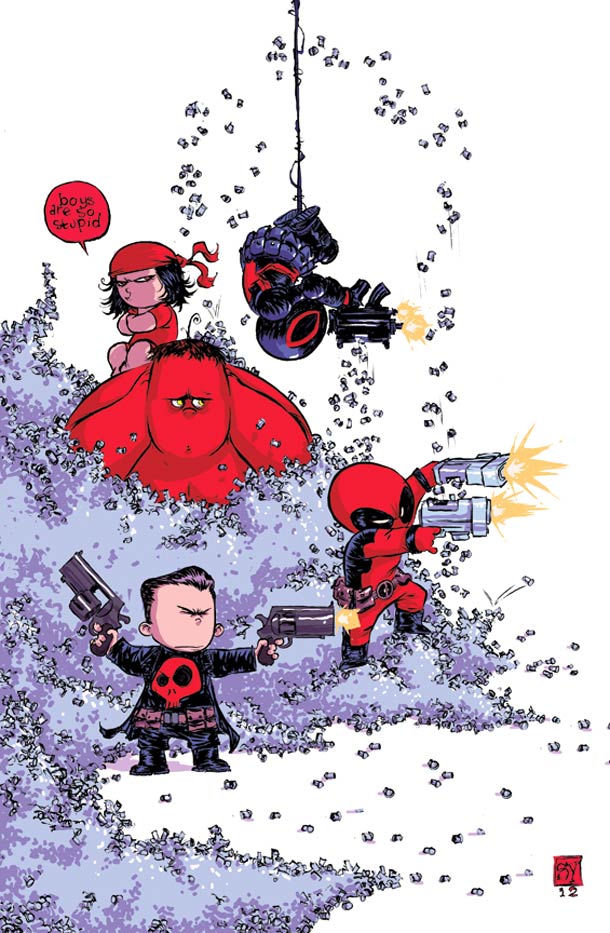 Episode Four of The Chippewa Valley Geek Podcast and Rhythm & Blues Revue is complete and can be found here or on iTunes.

It's August 2013, and we are continuing the gender issues discussion this month - this time from the other side of the septic tank!  Also, Eli Bremmer and the  Coalition!

0: Intros
0: The Up Front: On SDCC
0: The Interview:  The  Coalition
0:40:32 The Roundtable:  Masculinity and Gender Issues in Society and Geekery
The Community Calendar
The August Monthly : Golem?  I barely met ‘im!
The August Giveaway
Outro & Credits
Bonus Track:    Riddle of Steel

Show Notes!
The cover art used above for this month's episode post is a variant cover for Marvel Now's Thunderbolts #1 by the brilliant Skottie Young.  Check out his stuff at skottieyoung.com
The Interview! 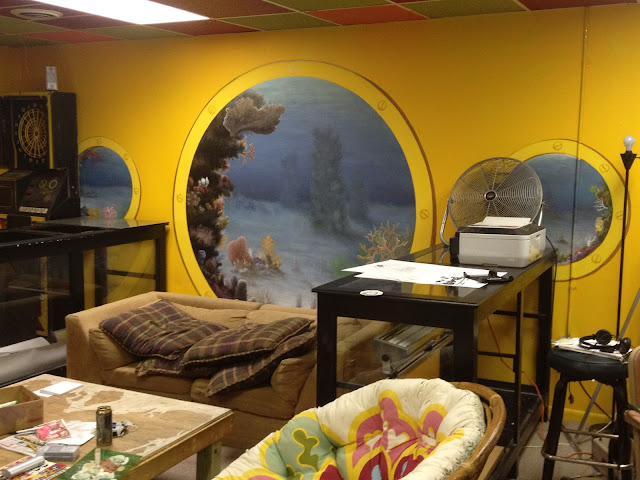 
Links from the Roundtable!

Posted by madgael at 3:44 PM No comments: