What's Geekin' Me Now - The One Ring from Cubicle 7

Like most folks of my generation, my first real exposure to fantasy literature was through the works of J.R.R. Tolkien.  In particular, I always connected in my youth with The Hobbit, the Rankin-Bass film version of which was shown regularly at events in my elementary school, and to this day it still probably remains my favorite book.  So I think like most, when I first encountered fantasy gaming through the red box Basic D&D in the early '80s, it was with a subconscious desire to try to play out the tropes and adventures I had seen my Baggins-y counterpart have for years.  And to some degree it worked...  My first significant character was a halfling after all who did pretty well for himself.  But for various reasons, some legal, some creative, the game, while totally fun, never quite gave me the same feeling deep down.  I was never able to immerse in a totally Middle Earthian experience.  Even later on when I learned of the Middle Earth Role Playing system from I.C.E., something was definitely lacking (though they've always had the best critical hit tables ever).  Whether the games used halflings or hobbits, paladins or Rohirrim, neither system really ever quite got the feel of Tolkien right, at least from a young fanboy's perspective, and I resigned myself early on to never really being able to go to there through rpg's.  Recently though, I have found myself being turned around on this entirely.

Back at GenCon 2012, I had a chance to demo the relatively new rpg The One Ring, written by Francesco Nepitello and published by Cubicle 7 Games, and it definitely went a lot further to capturing the essence of that world for me than any other attempt I had ever seen.  It stayed on my mind front and center in the many months that followed that session, and late last year, I finally scored my own copy of the core set for TOR, Adventures Over the Edge of the Wild.

The first thing one notices when looking through these books is that they are utterly gorgeous. The artwork perfectly captures the feel of Middle Earth without feeling derivative of existing material/interpretations at all.  There are stunning landscapes and vistas that make you wistfully think back to certain passages from the books, as well as amazing character studies throughout, including the first interesting elves I've seen in a good long while, and totally bad-ass women in realistic looking armor (no really).  My only criticism of the books themselves is the lack of a good index, which would be especially useful here since the layout of some of the rules at times seems a bit counter-intuitive.

The game system itself is one that can be overwhelming at first, just because it throws a lot of information at you right away.  But as usual, once you get a couple of core mechanics down, everything is really a lot simpler than it seems.  Basic task resolution starts with the feat die - a modified d12 which is numbered 1-10 and has two runes on the other faces (the Gandalf "G" and the Eye of Sauron).  Skills and abilities each have ranks from 0-5, very similar to World of Darkness, and each rank your PC has adds a d6 to your roll (which also have additional runes on the 6's).  Success is gauged by hitting a task's or foe's TN, and the combination of runes rolled can also result in automatic or critical successes or failures.

Combat uses an interesting mechanic which seems almost purposefully designed to be the exact opposite of the heavy tactical focus of OGL fantasy gaming.  Instead of moving minis around a battle-mat, characters in each round choose one of four combat stances, such as Forward or Defensive, and these determine the order of action and your options in the fight.  (Put simply, the more aggressive your stance, the more likely you are to strike a foe, but the easier you are to hit as well.)  Each stance also has a special action associated with it which makes use of a character's skills in the battle, from demoralizing your foes, to taking attacks meant for your companions.  Characters with extensive knowledge of tactics can use their savvy to earn bonus d6s at the beginning of each fight and add them to whatever rolls they want during the encounter, as they use their expertise to manipulate terrain or the flow of battle. Beyond the four stances though, combat flows in a pretty much free-form manner, and it would seem almost impossible to use miniatures with this system as written. (Though of course, I for one am sure as hell going to try, just to say I did.  I've been working on a custom "battle board" for TOR with the four stances broken out for players to move minis around into each round, and with all sorts of combat rules and cheats jotted in the margins.  Hopefully it eases the learning curve for new players a bit when we finally do get around to sitting down and trying this out at my table.)

In addition, there are little subsystems peppered throughout the game which capture the grander feel of Middle Earth perfectly, from playing through journeys and fellowships, to tracking hope and fatigue, or descents into shadow, corruption and madness.  As well, the game seems perfectly designed for long-term campaign play.  In fact, there is even a game phase/mechanic for players to spend XP to improve skills and abilities together at the table as a party.  I, for one, can't wait to put it all through its paces.

It now seems to me like such a stroke of brilliance to set the starting campaign material in the 20 years immediately following The Hobbit (To be clear, there is a 60 year gap between the Battle of Five Armies and the events of LotR.), and I wonder why no one seems to have thought of this before in previous renditions of Tolkien rpg's.  It always seemed a major stumbling block which impacts the playability of games like this (and those based on other licensed properties, like Robotech, or even Star Wars), having that limiting choice of playing either within the confines and time-frame of the established narrative arc (and thus limiting players' ability to affect the world and greater story around them,  unless you play in a alternate history of the game universe), or playing a game set after the established narrative, say in the Fourth Age of Middle Earth, when the world has already changed, and it takes a master GM to make the big bads not seem totally lame.  "Sure he's mean to kids and trips the elderly, but he's no Sauron, you know..."  Instead, setting a campaign in this interregnum allows the Loremaster total freedom and control of the plot.  Crucial events are proceeding in the background, but they are not dominating every waking thought of most Free Peoples, at least yet,  The Shadow is there, lurking, but not at full strength, and it can be as large or as small a part of the ultimate campaign as the Loremaster wishes It to be.

The only major drawback to the game as currently presented is a lack of expanded character options, resulting directly from the geographical focus on the Wilderlands in that 20 year span of time (i.e. - points directly east of the Misty Mountains).  Available cultural backgrounds include Bardings, Beornings, Dwarves, Elves, Hobbits and Woodmen (or Woodwomen if you want to be fair).  Thus, if a player wanted to take a crack at playing a wandering Rohirrim or Gondorian, the Loremaster would have no option but to either deny the request or put in some serious time adapting new culture traits and such from the options presented.  There are some who have the time or patience to do that themselves, but sadly not me.  That said I am led to understand that two large future expansions of the game are planned in the years ahead, each covering another 20-year period leading up to the War of the Ring,  I can only hope that these options would be fleshed out in the future expansions.  Fingers crossed.


The other fantastic thing I have discovered in regards to TOR is the amount and quality of additional resources available out there.  The Cubicle 7 forums are awash with players and Loremasters offering advice and tips, from expanded rules, to recommendations on linking available adventures together into a longer campaign, and the C7 team has provided a number of additional free resources themselves, from a new master Index available for download, to a series of original TOR YouTube clips you can connect to and use for ambient background music on your game night.

And yeah, sure TOR takes special dice, which is usually a big obstacle to purchase for me.  You could always modify your existing dice for free at home in a pinch with some forethought and a Sharpie maybe.  But honestly the dice available are so gorgeous, I didn't begrudge the additional investment personally.  And it should be noted that you do get a free set in the core box.  You only really need to pony up extra if you want more to share at the table as a host/Loremaster or if you are maybe a player who doesn't want to buy the core set, but you still want your own private dice bag. 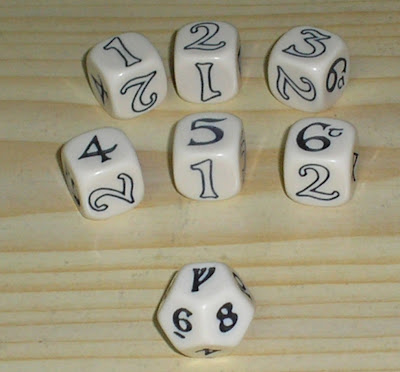 In any event, Cubicle 7 has a fantastic product on their hands, in my opinion.  Not they need me to tell them that.  I have been obsessed with this game for the last few months and can't wait to get started running a campaign for my group the next time we rotate and tag in or out of the GM chair.  My only worry is that, given my recent history running campaigns, it's likely I will get bored after a few sessions and instead get obsessed about the NEXT thing I want to run.  And that'd be a damn shame, but that's also a gripe for another blog.  For the moment, I just want to throw down with my new dice and show those ringwraith-ey bitches how we do things downtown...

You can help support the Geek by ordering your own pdf of The One Ring: Adventures over the Edge of the Wild here or here!
Posted by madgael at 6:05 PM