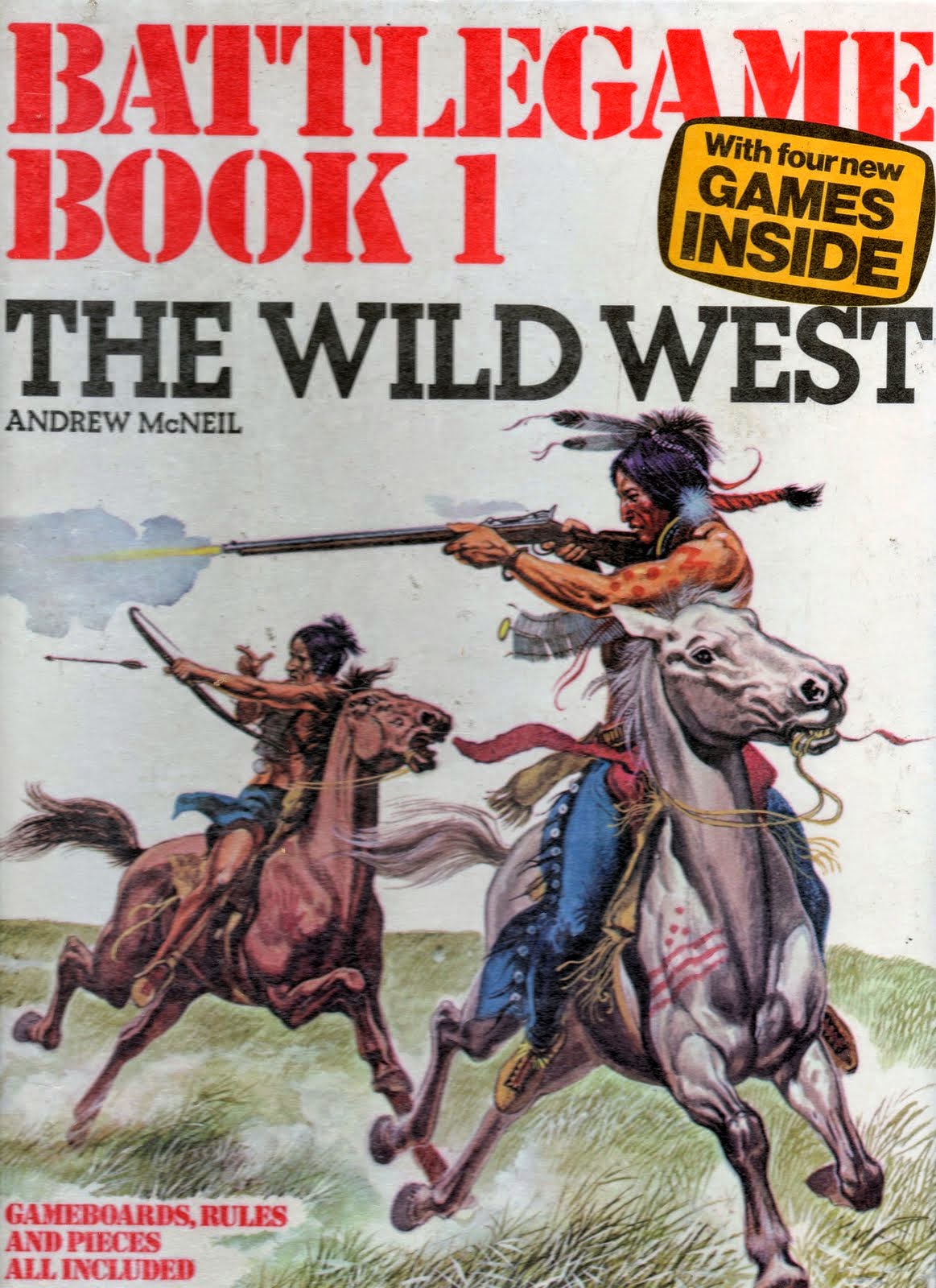 Being fairly far behind on the Battlegame project, Donny and I scheduled a double header last weekend, the first leg of which came from the inaugural volume in the series:  The Wild West.  The selection I picked out for our first foray from this book was a two-player option called "Red Cloud's War" - an example of a type of game that seems to crop up repeatedly throughout the series, and which I've been calling, for lack of something more appropriate, a "caravan management" game.

The scenario is set in Wyoming and Montana in 1866.  One player, as the Federal Goverment (Donny), must run supply trains from Fort Laramie over the Bozeman Trail, through the mountains to Fort Keogh before the stores there run out and disaster enues.  While the wagon trains themselves are relatively pokey and are confined to movement on the trail however, substantial cavalry is provided as an escort, which can roam the mountains both freely and quickly.

The other player (me here) represents the combined Lakota Sioux and their allies, defending encroached territory.  These forces consist of five different warbands, which begin play at individual camps spread around the periphery of the board.   When "eliminated" in a combat, the units just return to these camps and begin anew the following turn.  The Federal player places two units of any type in Fort Laramie at the beginning of the game and each following turn, including any units which are removed from the board during play (either through combat or successfully resupplying the fort).

A counter is set at 20 before play begins and is reduced by one after each of the Federal player's turns, as Fort Keogh depletes its limited supplies.  Each wagon that successfully reaches the fort increases these stores by 10.  The ultimate object of the game is simple enough.  If the supply counter is ever replenished up to 25, the Federal player has successfully resupplied and wins the game.  If the counter ever reaches 0, Fort Keogh is lost and the Lakota Sioux player wins.

Combat is a relatively simple affair requiring a single d6 throw by the attacking player, with odds determined by the ratio of combat values. (A warband should easily be able to pick off a wagon, but is at even odds vs. any lone cavalry.)  Units losing a combat will either be eliminated from the board (or returned to camp) or be forced to retreat down the trail (or be forced to return to the rallying point).

The initial strategy decisions are left for the Federal player, trying to decide which pieces to "develop" on the board first.  Bringing the cavalry on right away can lose precious time needed to get the wagons down the trail, but bringing too little of the cavalry out can leave the supplies dangerously exposed once the Sioux warbands actually get within range of the trail. There are forts along the trail, the sole purpose of which is to double the value of any Federal unit occupying them at the time of combat. The only incentive the Sioux player ever has to occupy one is simply to block the trail and deny the Federal units access to them. But this strategy becomes progressively less feasible as the game goes on and the numerical disparity makes itself felt.

Through a bizarre wrinkle in the rules, the Lakota warbands must return to their camps after every attack, whether it is successful in eliminating the defender or not. Given the time required to bring these units back to bear on the trail once more, this makes it very difficult for the Lakota player to develop troop concentrations of any significant duration. In addition, it forces a cost analysis which must be thought through with any even odds attack vs. cavalry. Given the cyclical nature of the game (wagon caravans being restarted on the trail in waves), even a successful result can end up repositioning an eliminated cavalry unit closer to the new center of activity on the following turn than the warband's own new position. A “retreat” result, which would send the warband to the much closer “rallying point” instead, is only possible when defending from an attack.

The game tips recommend use of the cavalry to provide a screen protecting the wagons, and this ultimately turns out to be a very effective strategy, which can be useful to both players in differing ways. The Federal numerical advantage certainly allows for several cavalry units to be devoted to blocking out each individual warband, but by the same token, a crafty Lakota player can use this to tie up a disproportionate amount of the escort, leaving the caravans exposed to other attackers. The upshot, once all the pieces are developed onto the board, is a bizarre game of cat and mouse, wherein the Lakota units spend much of the time attempting to draw off the cavalry and perhaps provoke an attack, while staying close enough to the trail to be able to strike at any outlying wagons that offer themselves.

Once it kicked off, our game developed quickly.  Donny opted for speed and brought out mostly wagons on the first few turns. There were some cavalry units in place by the time the warbands made first contact, but on the whole I was able to swarm the caravan pretty effectively. Unfortunately, my results in the first few actions were dismal, and I had very little to show for results besides needing to start over from camp. By the time my units got close enough to be a threat towards the latter half of the trail, the Federal units had regrouped and reorganized themselves into a sufficiently defensive posture, so that, while I was about to knock out several wagons, one did successfully reach the fort, extending the game and forcing us to turn our attentions to the “second wave” of wagons departing Fort Laramie.

Unfortunately by this time, Donny had worked out the use of the cavalry screen pretty effectively. It was progressively more and more difficult for me to get clear avenues of attack at the supply trains as they meandered down the trail, and while I was able to pick off some here and there, ultimately one wagon reached its destination, later followed by another, the last wagon left in the caravan. With this the fort was successfully re-supplied and the game was over. The white man was free to live unmassacred in Montana, for at least a few more years anyway.

Here is how Red Cloud's War fared in our scoring:

Donny         Brian
Quick to lean           5                  4
We both hit the ground running with this game and thought it was quite easy to pick up.  I did have a minor quibble with a couple of the weirder rules that took me most of the game to be mindful of, like diagonal movement only being allowed on the Trail itself, and the annoying habit of Lakota units of returning to camp even after a successful attack.

Cool factor               4                  5
Red Cloud's War was a home run (or at least a triple) for both of us.  Donny was particularly impressed how well the rules ensured the historically-accurate usage of hit-and-run raids and ambushes by the Lakota, whereas I totally fell in love the various possibilities of the countdown and resupply mechanic constituting the object of the game.

Replayability            4                 4
We both felt very strongly this is a game that we both could and would play again, given the time and opportunity.  Donny's only reservation was that the "waves" of wagon trains could be reduced to pure mathematical strategizing (Only one of the first wave needs to get through,  and in such a way as to require only two of the second wave, and so on), rather than being more immersive in its overall strategic and historical paradigm.

Balance                    5                 5
Not only did both sides have a pretty equal chance of winning Red Cloud's War, a lot of the seeds of those victories were laid down early in the game.  So while the outcome could be construed on some level to be the result of random dice (say me shanking on my first few wagon attacks), it's in such a way that a player has more than ample time for planning to recover (or not) from the hazard of the die (i.e. - There is far less chance of the game feeling like it was decided by a final dice roll at the end of the game).