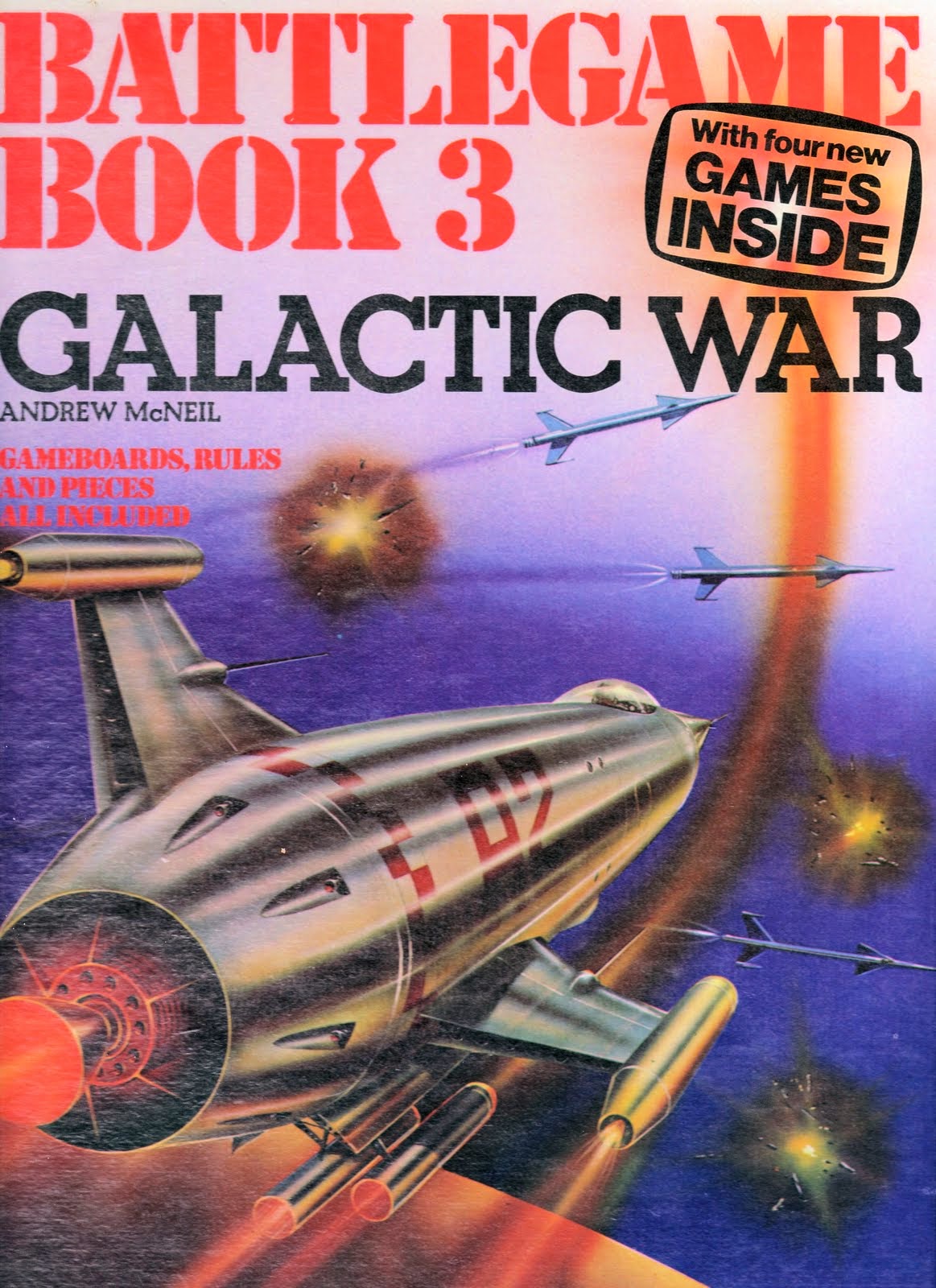 For the second half of our recent double-header, we moved on to Volume 3 of the series, Galactic War.  To say that this book, not being devoted to a particular period of military history, is an aberrration among the Battlegame Books would be quite an understatement.  The first half is a brief overview of basic astronomy and cosmology and a history of the space program circa 1975.  (For the record, my single favorite part of the book is how it describes the amazing success of the Skylab program in the present tense.)  As there has not actually been any galactic war though of which we are aware (at least at the time of press), the second half of the book delves into the purely speculative "someone thinks this might be something that could happen someday" digression, including the four wargames, which are pure matinee sci-fi schlock at its best.

Invasion Earth! is no exception and is definitely chock full of wtf-itude.  The scenario revolves around an attempt by an amphibious alien race called the Ganoids (Dastardly Donny here, largely due to the physical resemblance) to conquer the Earth by planting enough breeding pods into the Pacific Ocean to spawn and overwhelm the puny humans.  As you do.

The other player (me here) takes on the role of Earth's woefully underfunded and undermanned Pacific Command, charged with the task of eliminating enough of the breeding pods as they are seeded to prevent the Ganoid invasion from achieving critical mass.

The earth forces consist of essentially four fleets:  two slow-moving submarines, a much faster aircraft squadron and a middling attack hydrofoil.  In addition, the Pacific Command controls three one-shot orbital missle satellites which "scroll" across the top of the board each turn.

By contrast, the Ganoid player controls six "beacon" space ships, with no real movement capacity to speak of.  Each turn, one ship may be landed anywhere on the board as desired.  The following turn, that craft generates a spawning craft, while another beacon ship may be landed elsewhere.  On the third turn, the spawning craft is submerged beneath the ocean depths, and the beacon ship may depart to anywhere else on the board.  The object of the game is for the Ganoid player to get 10 craft submerged successfuly (or 8 submerged in a contiguous group, which is far more unlikely to happen), at which point humanity is overwhelmed by dripping aliens clawing up the beaches, dogs and cats start living together and...  well, you get the idea.


If at any point before the spawning craft is successfully submerged, that square is attacked by the Earth hydrofoil or aircraft, everything within the square is destroyed.  (This obviously dictates the primary Ganoid strategy, which is to spread out landing sites at the edges of the board, to delay humanity's response in best hopes to get as many pods underwater as possible.)  Once submerged, neither the hydrofoil nor the aircraft may make an attack on a spawning craft, but it is then exposed to submarine fleet attack.  Of course the two submarines move with such agonizing slowness, they are of limited usefulness and lethality, depending on where the Ganoids manage to effect their landings.

Finally, the three orbital missle satellites (or OMS's) are the Earth player's one major ace in the hole.  They track across the top of the board by one space per turn, and at a certain point each may be used to "nuke" a square in the column beneath from orbit.  Everything within that square is destroyed (whether submerged or not), and that OMS is then removed from the board.  You get three shots only.  Make them count.


As we commenced the game, my initial strategy was to attack the beacon ships directly as they landed, thinking I could quickly end the game by taking out these six units asap.  Donny was quite adept at spreading my forces out across the board though, and it quickly became very unfeasible for me to reach enough of the beacons before they took off for other parts.  As a strategem for victory, it proved unlikely to be effective.

After a brief re-assessment, I began to concentrate on the spawning craft instead.  The Ganoid player has a supply of 16, and realizing the impossibility of him submerging 8 in a contiguous grouping before being attacked by my aircraft, it became a matter of simple math.  If I could destroy 7 of the spawners, Donny would be entirely unable to meet his victory conditions.

I think I already had destroyed one grouping in mid-spawn by this point, and subtracting the three nuke hits I expected when my OSMs were lined up where I wanted them to be, this meant I had to take out just three more of the pods with my mobile units.  It was honestly touch and go there for a while...  Ultimately though, my subs were able to reach just enough of alien landing sites to tip the balance towards the defenders and victory was mine.

Here is how Invasion Earth! fared in our scoring:

Donny         Brian
Quick to lean           3                  3
The rules themselves were simply stated but took a good while for us to wrap our heads around, such as the alien forces having no attack value or movement speed.  We were repeatedly confused by the human units having their attack value printed on the unit (instead of the speed), and the differentiation between which units could attack aliens on the surface or submerged was not immediately clear.

Cool factor               5                  4
I was particularly fond of the OMS mechanic.  An interestying variant would be if the satellite attacked everything in the row beneath, not just one square in the row.  (On the first read-through of the rules, that was actually my interpretation of their attack capability.)

Replayability            4                 4
This game does not just lend itself to replayability, it demands it.  We both felt it took us most of the game to get our bearings in terms of how it worked, and that it would require additional plays to fully get the hang of.

Balance                    3                 3
It was hard for us to sense any particular slant during our game, but the tips and suggestions included on the rules page suggest making the game harder for the Ganoid player after a few plays by adding OMSs, which definitely implies a biad towards the alien side in the base game.