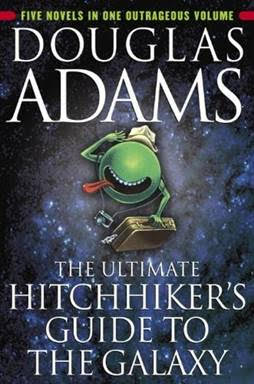 Time is an illusion.
Lunchtime doubly so.

--
Once in a while, this Geek Who Reads feels the need to wander again the Elysian fields of the misty past and re-read a much-loved work to see if it still holds all the wonder and beauty that it did for me in childhood.  Back in high school, I read The Hitchhiker's Guide to the Galaxy, The Restaurant at the End of the Universe, and Life, the Universe and Everything.  This was, of course, back in the halcyon days of about 1983 when men were men, women were women, and trilogies had three books.  Then 1984 came and So Long, and Thanks for All the Fish came out, heralded breathlessly as "The astonishing fourth book in the Hitchhiker's Guide trilogy!!"  Well, pedantic me had had enough.  Every right-thinking person knows that trilogies can't have four books, so I abandoned my pursuit of the series and never even noticed when Mostly Harmless was published in 1992.

Now, if you grew up on a steady diet of Arthur C. Clark, Robert Heinlein, Robert Silverberg, Philip K. Dick, Ursula K. LeGuin, Gordon R. Dickson, Isaac Asimov, Larry Niven, and Roger Zelazny, then you have a pretty good idea of what science fiction is all about.  Mostly, it's about putting people in novel futuristic hypothetical situations that couldn't possibly happen today and watching how they respond.  Science fiction is truly a laboratory for exploring human values, where you alter the social construct by making a few key technological changes, and protagonists with fantastic skills and amazing knowledge navigate the perils put before them.  Then Douglas Adams came along and said, "F**k that!  You chumps have the imaginative breadth of a sack of stale peanuts," and proceeded to gleefully thumb his nose at everything that classic sci-fi has held to be holy.  In this far flung sci-fi world, no one understands how their technology works and the characters are just as cluelessly incompetent as average mouth-breathing citizen of today is.  Mostly, they seem to muddle through on dumb luck alone.

Arthur Dent is the primary un-hero of this extended story.  Just a normal British bloke, trying to stop his house from being demolished by uncaring government officials to make way for a traffic bypass at the opening of The Hitchhiker's Guide to the Galaxy.  But along comes Ford Prefect, Arthur's unusual friend who warns him that the Earth is about to be destroyed by uncaring Vogons to make way for an intergalactic bypass.  The duo manages to get aboard the Vogon vessel just before the Earth is destroyed, but are soon captured and thrown out the airlock for failing to appreciate Vogon poetry.  Moments before death, they are picked up by The Heart of Gold, a ship powered by the infinite improbability drive and commanded by Zaphod Beeblebrox who is Ford's cousin and also the President of the Galaxy.  Accompanied by Trillian, a former earthwoman, and Marvin the Paranoid Android, they journey to the world of Magrathea where they learn the story about the supercomputer Deep Thought and the Ultimate Answer - 42.  They also learn that Earth was built as an even more super super-computer to come up with the Ultimate Question.

That's Hitchhiker's Guide.  The following four books make even less sense, and defy summarization.  In fact, the whole extended story is just flaming nonsense that gets weirder and jumpier as it bounces across the span of time and throughout the infinity of space.  But, and it's a big but, along the way Adams drops all these brilliant little bits that have become iconic. 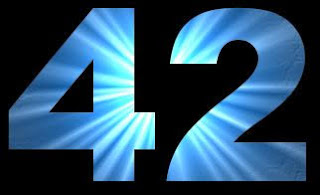 42 - Every geek knows this one, even if you've never read the books or seen a movie.  42 is THE ANSWER TO LIFE, THE UNIVERSE, AND EVERYTHING. 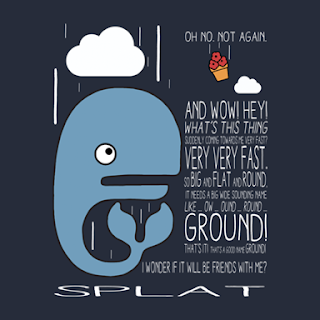 A whale and a bowl of petunias falling through the atmosphere and having a few fleeting thoughts before splattering across the landscape below.  If you see someone wearing a variant of this on a t-shirt, they are signaling to you that they are on the inside of geek culture. 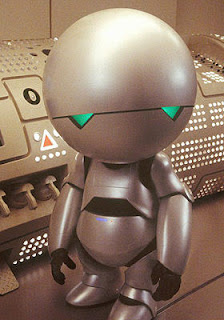 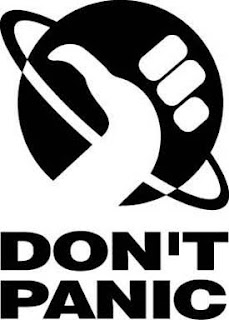 DON'T PANIC.  The reassuring words emblazoned across The Hitchhiker's Guide to the Galaxy, by which I mean the book that Ford Prefect lends to Arthur Dent which is a sort of encyclopedia of everything. 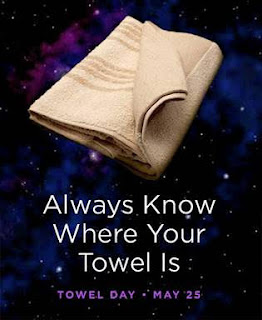 Towels.  This is another leitmotif of the series.  Always carry a towel.  Useful for so many things.

You get the idea.  It just goes on and on.  Like a mushroom hallucination, it makes no sense at all but it has left these images burned into our collective subconscious.

One of the other repeating themes of the book is probability as a fifth dimension.  The characters' travels take them through the depth and breadth of space-time, from the very beginning of time to the very end and all throughout the unimaginable vastness of space.  And a point that is often demonstrated is that through all that time and all that space, which is so unimaginably vast, everything you can conceive of is likely to have happened somewhere, somewhen, no matter how improbable.  The Infinite Improbability drive actually works on this principle, powered by a cup of tea, and is what allows the characters to bounce around the universe so.

Adam's writing is clever and witty, filled with twisted logic and turns of phrase that simply sparkle.  He is a master of great sentences.  But even though his short game is fantastic, his long game leaves something to be desired.  The overall plot of the series is wandering and ultimately rather unsatisfying, in spite of the fact that every page is a pleasure to read.  However, no one can deny what an impact these books have had.  Reading this series will forever change your outlook, even if it leaves you unsure as to why.  And that is the ultimate hallmark of a great work of literature.