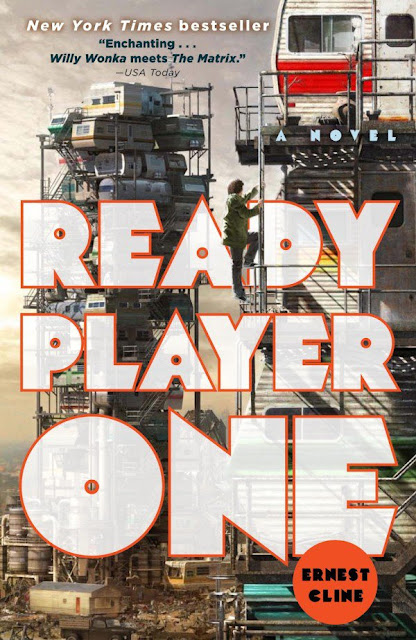 It's 2044 and the world is a post-apocalyptic dystopia.  Yes, yes, you think.  I've seen this one before.  There was a nuclear war or a killer virus or an alien invasion or global warming or some shit and now everyone is running around in souped-up killer cars fighting over the last few drops of gasoline or clean water or Mountain Dew Code Red, right?

No.  The dystopian future is actually one based on increasing economic inequality.  The masters of capital have won completely and the 1% have everything.  Everyone else is left with scraps.  Many people live in "the stacks" - shantytown high-rise structures of aging mobile homes - and daily life is a struggle for survival in a barely-functioning economy where all public goods and resources have been privatized and precisely calibrated to wring every last drop of life out of the huddled masses.

On the bright side, there is OASIS.  Part MMORPG and part virtual life, people escape their reality in this simulated world.  OASIS brings education to the youth, and OASIS virtual currency is the most stable medium of exchange on the planet.  Invented by the brilliant but eccentric James Donovan Halliday, OASIS is where our hero, young Wade Watts finds meaning and purpose in an otherwise hopeless existence.  You see, when James Halliday died years before, he created an Easter egg hunt within OASIS.  The first to find all the clues and pass all the tests would inherit Halliday's multi-billion dollar fortune and become the wealthiest person on the planet.  Millions of egg hunters, or "gunters" as they would later be called tried for years to even find the first clue, but no one could.  After some time, most of the world gave up on the hunt as being either impossible or a hoax, but not Wade Watts and a few of his virtual friends.  Halliday was known for being a huge fan of 1980's pop culture, and these die-hard gunters obsessively study every clue, every nuance of this era and the relationship to Halliday's life in order to understand the keys to the great uncracked puzzle.

However, when Wade finally thinks laterally enough to discover the first clue, the race is on.  Teams of mercenary gunters with powerful corporate sponsorship will stop at nothing, including assassination attempts in the real world, to beat the independent gunters to the prize.  Wade and his friends and fellow gunters Aech, Art3mis, Daito and Shoto have to make careful decisions about whether to compete or cooperate with one another against the powerful and ruthless Innovative Online Industries over the next several months as the search heats up and more clues are unraveled.  Wade and his cohorts have to resort to truly desperate measures in both the virtual and meat-space worlds to survive.

This book has a lot going for it.  Though the premise is kind of silly, it pulls you in and keeps you there.  The writing is absolutely gripping, the characters are compelling, and the book is very hard to set aside for little annoyances like sleep, eating, your weekly RPG session, or the house being on fire.  The action and the stakes keep rising throughout the story and the ending pays off well.  However, you might find the persistent love of all things 1980s a little grating if you are too young to remember Zork and don't geek out on old Commodore 64 games.  Even so, it's a fun book and a super-solid read.  If you really like it, check out Armada by the same author.